Last  month I celebrated 32 years as a DJ and entertainer. Technology has come a long way since I started and evidenced by the fact that I’m sharing my thoughts on the subject of professional anniversaries on this fancy-schmancy, electronic, new-fangled, on-line journal.  Click here and here for previous commentary.  I have noted before that the first song I ever played as a DJ was Gary Numan’s “Cars”.  It was a brand new song then and it’s almost 33 years old now.  I think I played it on a cassette tape the first time.  You young-uns may not know what a cassette is- it’s pictured at the top of this photo.  There would be about 20 minutes of music on one side and then you would take the tape out of the player and flip it over and play 20 more minutes on the other side. (The cassette pictured is not the Gary Numan tape that I played.) 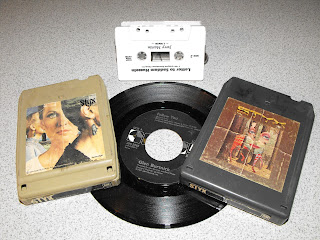 But I did play those two 8-track tapes by Styx that night- in addition to others.  Come Sail Away, Blue Collar Man, Renegade etc. It was my Dad’s stereo and I frankly never intended to be a DJ.  I was a keyboard player dog-gone-it!  A few weeks later, somebody who was there wanted me to do their party too and I resisted, citing the fact that it was 8-track tapes that had to be cued in advance and it was my dad’s stereo yada yada yada.  They insisted- “No, we loved what you did- you really rocked it and made it fun!”  It’s 32 years later now!
8-tracks and cassettes are very difficult for DJ work and I switched to vinyl- mostly “45s” which had one song on either side. You can see one of those too in the center of the picture above. Vinyl is making a comeback in recent years.  It has a warmth that digital is missing sometimes.  There is also something to be said about the fact that you  have to invest in the listening experience with vinyl.  It’s not as convenient as an ipod.  You actually have to set aside some time to listen- it’s difficult to do something else like work out, send emails, groom your nails… you have to get the record out of its sleeve and put it on a turn table and put the stylus down and listen to 20 minutes of music and then… you have to get up and flip the record over and listen to the other 20 minutes.  You are almost required to stop down and listen to what the artist is trying to say. It’s even better when you just surrender to the experience willingly. Some songs become more profound when they are played after a couple of other songs that might set the mood and then a musical experience can ebb and flow.  There are liner notes and album artwork and lyric sheets to read and study while you listen.   ﻿ 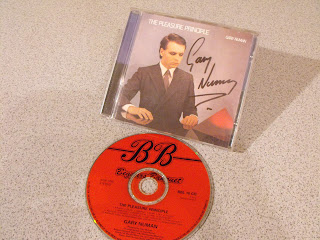 In the middle of my career, CDs came out.  I resisted mostly because I already had a huge investment in vinyl, already a decade in, and didn’t want to buy another collection.   Once I finally made the switch I wondered why I hadn’t done it the day that CDs appeared.  I could carry far more music and have quicker access to any given song on the fly.  Sadly, there are tens of thousands of artists and albums that never made it to digital and may never be seen again.  Gary Numan made it.  You can see that I had him sign this CD copy when I saw him in LA in 1997.  I’ve met him a few more times since. 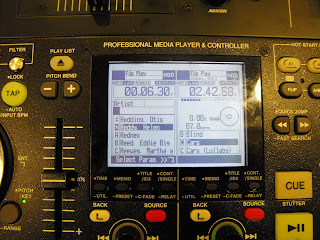 On my 32nd anniversary as a DJ, I played his song again at a very large singles mixer/dance in Tempe AZ.  The song still seemed fresh and energetic- it packed the dance floor with about 300 dancing bodies!  You may want to click on the picture to see my work screen with “Cars” highlighted on the right.  Actually, the computer file I’m using here was made from the CD pictured above.  I carry about 20x the music that I used to carry with no extra weight and space and even quicker access to any song- usually about 8 seconds to find anything. It cues in about a quarter second but it takes me 8 seconds to find and select it.

I actually resisted switching to digital in 1999 mostly because I’m not a computer whiz and it was hard for me to imagine showing up for a gig without a disc that I could hold in my hand.  MP3s were cutting edge at the time and I bought a computer and adapted it to the purpose of DJ work.  The industry moved that direction very quickly and my workstation pictured was the first commercially available computerized DJ system.  It’s nearly 6 years old now and is becoming antiquated.  I like it though.  It has really been a battle axe.

I think that Bing Crosby and Beethoven and Glenn Miller and Carmen Miranda and Bill  Haley and Handel and John Lennon would be thrilled to know that I think their music is important all these years and centuries later and that I carry it on an electronic device and that I play it regularly.
I’m not sure what the next format will be.  I don’t think we will “own” music anymore in the way we do now and I’m not sure how artists will be paid for producing it but I do believe that however that turns out, an entertainer like me will still be able to make a living by adding entertainment value in the playing of the songs.

Styx’s Tommy Shaw wrote what I think is one of the great metaphors of rock music in a song called “Sing for the Day”. In the song, “Hannah” is the embodiment of everybody who has ever loved a song. The song is written in the first person and so the “I” is the song itself. It invites Hannah out at night to sing and dance. It knows how a song can change a nation, it knows how to heal, it knows how to express the things that people have a hard time verbalizing otherwise. It also realizes that if the musicians don’t play it and the people don’t sing and dance to it, the song is forgotten and it dies. It has no life on its own apart from those that love it and keep it alive.  The song even pleads that Hannah won’t forget it when a new song comes along.  I love playing a song like Journey’s “Don’t Stop Believing” and seeing people who weren’t even born when that song was written sing along with every word.  I can cut the music for fun in key places and hear 300 voices singing in unison as loud as my sound system had been.

Live music is still alive and well and viable.  Just this week, I journeyed to southern California to see my son Javin play guitar live at the House of Blues in Anaheim. 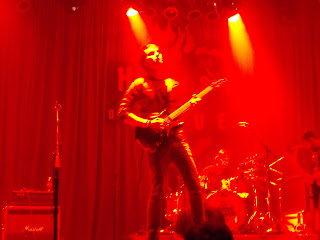 That’s him on the left here. 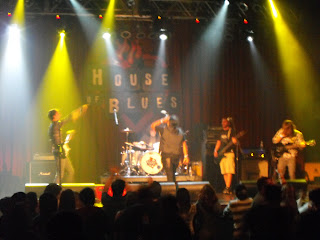 As I mentioned above, my first event worked well and became the genesis of a career in music and entertainment because I was an entertainer, not because I was simply playing somebody elses songs on 8-track tapes on my dad’s stereo.  Just a reminder that all of the brilliant technology in sound and lighting won’t save an event if the DJ stinks. This will sound cocky and arrogant and that is not the intent, but I could go in to an event with an ipod and a couple of speakers and make it happen.  I sure love having all of the brilliant equipment and lighting to make my job easier, it frees me to BE the entertainer, but my job is not to simply run the equipment.  An ipod playlist won’t respond to the crowd and the moment, it will just play the next song.  A good DJ will feel the moment. My job is to add entertainment value to those songs by playing them in an order that makes sense and creates energy and by highlighting dramatic elements of the songs with cool lighting effects and by giving voice to the emotions of the occasion and taking attendees on an adventure and helping them release.  They will heal their hearts and make sense of the troubles in their lives and they will celebrate a landmark event in their family or in their company and they will mark the times and seasons and they will feel better when they leave.
Sometimes when I’m at a piano event, the opening notes of some songs are met with absolute jubilation.  There are lots of songs have entered the collective consciousness and have been a constant to people through good and bad times.  Three and four generations of people know those songs.  They know every word, they sing along, they are hugging each other, dancing and getting in to it.  I feel their energy and I dig down and nurture it and add to it and send it back to them and they feel the renewed energy and they start getting down and laughing and singing and dancing and they send it to me and I send it to them.  It’s a love fest!  People become comfortable expressing themselves in ways that they otherwise are uncomfortable doing.  Tears can be shed comfortably.  It helps let go of the hurt. 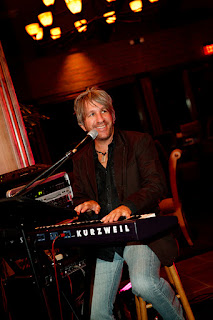