The Beauty and Value of Fear

Last week, I had a great pleasure of providing sound reinforcing and music for a giant vow renewal ceremony on Valentines Day in Fountain Hills AZ with Larry James pronouncing the service. This event had the potential to attract 3 or 4 thousand people as they were attempting to break a record for a vow renewal ceremony at 1088.  (1087 couples in Miami FL in 2009)

Most of the events that I do are for around 400 people or less. When you have more than that, you need to have a larger sound system and really be moving some air to be heard. I can expand my sound system to accommodate about 1200-1400 people for music and dancing or maybe even 2000 if it is a speaking event where you can count on the crowd being fairly quiet as opposed to dancing and shouting like they would if music were playing.  I was a bit concerned after I committed to doing the vow renewal ceremony whether I had enough sound hardware to make it the lovely event that I hoped it would be if they really did attract 4000 people.  They ultimately had about 2000 people, 762 couples renewing plus family and friends attending. I think it was certainly a record for Arizona, if not the entire Western U.S. 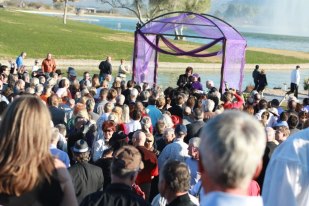 When I arrived, I was directed to set up my workstation on one side of the stage so as not to block the view of the fountain from the amphitheater off the opposite side of the stage.  Even though I was going to set up on one side or the other anyway, I still intended to put a couple of speakers on stands on each side to be above people’s heads and I would have the advantage of being able to rotate them towards the check-in area for announcements in advance of the service.  Against my better judgement, I put only 2 speakers on stands, one on each of the far edges of the amphitheater to avoid blocking the view of the lake and the fountain in the background. Another 6 speakers plus a big sub woofer were placed on the ground.  As the ceremony was about to begin, the crush of people that gathered around that stage rendered most of the power of those speakers on the ground useless- all of the sound was absorbed in a thousand knees!  It was still functional.  I walked around the whole crowd and could hear well enough, but it wasn’t the 100% that I would have liked as a sound guy. 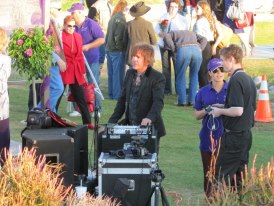 Here’s me worrying over the sound

I tell you all that so that I can tell you this.  Larry James, who performed the ceremony that day, is a local wedding officiant and he also writes books, blogs and does public speaking.  We have done a couple of weddings together in the time that I’ve lived in Phoenix and it’s always a pleasure to see him at industry functions and say hello.  We had a moment to chat after the festivities and he said he had greeted so many guests, many that had been married by him some time in the past, and that he overspent his voice and he further confided in me that he had been nervous with so many people! I had been a bit nervous too, for other reasons described above.  I spoke to the same people, during gathering time. but I was making house-keeping announcements and thanking vendors who had donated goods and services to the event- nobody was really listening to me, but they WERE listening to Larry!   Here’s a guy who is well-read, well-travelled, established in his career, adding to expertise from previous careers, handsome brute, fit and trim, well-spoken, respected by the community and his industry, master of his craft. and he was nervous! Isn’t that wonderful??!? 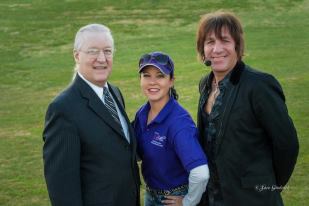 Officiant Larry James and event creator and host Stehpenie Bjorkman and myself.

I’m flattered that he felt comfortable telling me that, but I’m even more happy to know that he felt that.  Most people would rather die than speak in public.  I enjoy that part.  There are other things that make me nervous about a performance.  I’ve been a DJ/musician/entertainer for 33 1/2 years now and I know it sounds cocky, but I have invested thousands of hours becoming a master of my craft and I still get nervous going in to an event.  I’ve found that if I feel a bit of nervousness, or if I feel some level of worry over some of the event details or important cues, it translates into adrenaline and I do a better job.  It adds to my focus and because of the second nature of my abilities, my tools become an extension of my mind and hands and I rise to the occasion.  If I’m too comfortable- if it’s an easy event, the customer is flexible and easy-going, the event doesn’t have a lot of details to fuss with… I may not have that extra drive or mental focus or physical adrenaline push to do a good job. 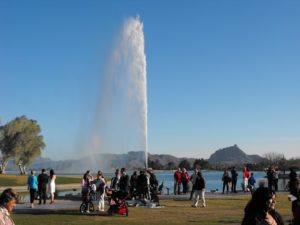 I always put myself through a rather strict quality control regimen for each event. It starts on Monday morning reviewing the events coming up in the next 10 days.  Will dry-cleaning for any stage clothes be done and picked up in time?  Do I have the specific songs needed and does any music need editing for profanity or anything?  Have I checked pronunciations of difficult family names or any other ethnic or religious words that I don’t understand?  Were there any needed equipment repairs noted on previous gigs that need to be fixed?  (I use a tag out/lockout sticker when I note a piece of equipment not working properly so that I remember to fix it or replace it before the next event)  Have I double checked load-in time?  Event start time?  What sound and lighting equipment do I need to bring? Any freeway closures this weekend?  Have I spent some time on any new or unfamiliar music so that I know beats per minute, energy level, how it starts and stops, any dramatic elements?  Have I received or arranged final payment for the event? 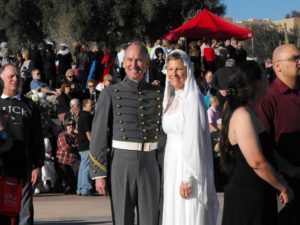 This couple wore what they wore 35 years ago!

I used to work in the steel business in LA and the owner of the company had a small plane and we would run company errands in that sometimes.  He was in his 70s and had flown for years but every time he sat down in that cockpit, he opened up a written quality control manual and put himself through the paces to make sure everything was working properly and it was safe to fly that thing and that nobody inside or standing near the plane would get hurt. 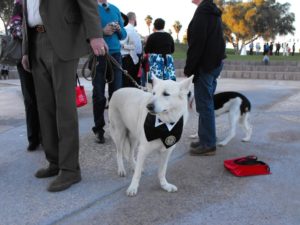 A service dog who wore a tux for the occasion.

Now, nobody is gonna get hurt if a DJ messes up a cue, but it’s the difference between good and great.  A great DJ isn’t going to miss a cue- at all- ever!  The music and the elements of the event are going to be right.   I often tell customers to imagine a dry cleaning service- you take your clothes there, they do a great job, they are in your neighborhood, the price is right, they are friendly and conscientious.  You go back in 3 weeks, and next month and next year because they are a good dry-cleaner.  Then, after many years, they tear something, they stain something or they lose something… you are unlikely to throw them out because you have lots of otherwise stellar history and you could just say, “well, it happens.”  (if they are conscientious, they will do their best to make it right anyway.)   With a DJ for a big event like a wedding, today can’t be the day that you figuratively lose a nice jacket at the dry cleaners.

How often does one hire a DJ? Once or twice in lifetime? You don’t have a period of years to develop a relationship that would allow a major mistake.  It has to be right on event day!  The bride has dreamed about this day since she was 9.  Mom shed tears of joy as the wedding dress was selected and fitted.  Thousands of dollars have been spent on other decor and food and other event professionals.  Every effort should be made to put on quality entertainment.

Now, I HAVE played for families or corporations over a period of years in my history with Sweet 16, engagement, wedding, graduation, another sisters wedding, a family Christmas party, yet another siblings wedding etc.  Or on the corporate side, a Grand Opening or retail promotion, a corporate awards banquet, a mixer dance after a team-building seminar, then a company picnic, then a holiday party, then another grand opening as they have more success. I have some fiercely loyal customers but just because they have that loyalty doesn’t mean that they always have an occasion to hire me every month like you would use a dry cleaner. I contend that the reason for such loyalty to me is a combination of my personal passion, my love of music and my love of people (and I suppose that allowing myself to feel some nervousness is part of that passion) combined with a dedication to a regimen of providing quality.  The events go right!

I thought Larry did a great job that day.  It was well-written and expertly delivered, it was humorous, it was emotional and it was exactly the right length.  I know Larry had prepared his remarks, edited them and reworked them and had rehearsed them.  He said it was 22 minutes in front of a mirror and he came in at just under at 21 minutes.  He was on time, dressed, and he delivered a knock out!  I’ve been at it for a lot of years and I still get emotional at such things.  Standing fairly close to me was a couple in their 70s holding hands.  He wasn’t the specimen of male physicality that he had been when they married- I suspect he had perhaps had a mild stroke in recent years.  They held hands and looked lovingly into each others eyes and promised to continue loving like that had for so many years already.  There were couples that had been married 6 weeks and some for 6 decades.  The emotion was palpable!

I hope there is something going on in your life that makes you a bit nervous.  If not, are you doing anything important in the world?  Embrace the fear and use it to rise to the occasion.  I’m glad that Larry was nervous, it added to the magic!