I had some new stage clothes made this month which is always a good perk of working in entertainment. I can wear some really great stuff and even if its over the top, it’s like I get a free pass because I’m the DJ and I’m supposed to wear something outrageous. It’s good that I’ve worn it on stage a couple of times and it seems to have good ju-ju and when somebody says how cool the outfit is I get to tell them that I designed it myself and had it custom made. The jacket and shirt were made in Scottsdale at Jean-Paul Jeune and the boots came from Spain and the pants in this photo were just out of my closet because the pants that I ordered for this outfit were coming from Ohio and they didn’t’ make it in time. In fact, it’s been 50 days since I ordered them and they keep telling me that they are on the case… 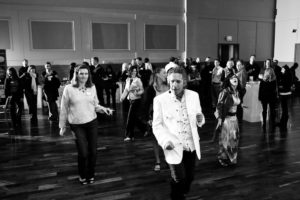 I’m leading the timid masses at a big industry mixer for several professional associations and networking groups within the wedding and event and tourism and hospitality industry. I didn’t expect any dancing at such a function so the fact that I got 4 people going was a bonus. I didn’t want to bring all of the lighting rig and video projection and everything but I did relish the opportunity to show my industrymates what I had and what I could do. Special thank you to my buddy Andy DeLisle for letting me use this photo.

The trouble with distinctive stage clothing is that I have to be cautious where and when I wear it. If I wear it in front of a particular group, I have to make a mental note not to wear it the next time I appear. Those Hollywood starlets that wear a $10,000 gown and get photographed in all of the trade and gossip magazines can’t wear that dress again.

I played at a really fun wedding last weekend at Raven Verrado Golf Club out in Buckeye. The ceremony actually took place in the city park in the center of town. Here’s the bride and her dad walking across the park. She wanted a certain lyric to swell at the moment she arrived at the stairs about 30 feet in front of her in this shot. I nailed it. Even the minister’s first comment was “Wow, that was dramatic!” It’s sometimes hard to cue such things on the fly because in rehearsal, they walk one speed and at the actually wedding with the nerves and the adrenaline going, they often walk faster. 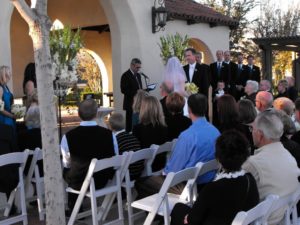 There is a really warm and cozy banquet room with great acoustics at the golf club but the bride chose to have her dinner out on the lawn and rent a tent. It was pretty charming with my lighting and everything. I would have liked to put up my dancefloor lighting rig but the top of the tent was too low to do it. 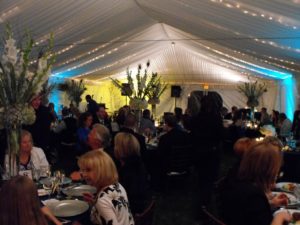 I think a few of the guests were rocking out to a Bon Jovi song here. 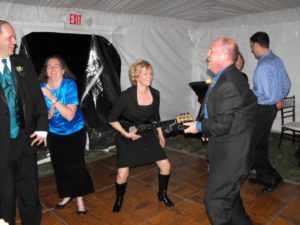 That night was the beginning of a string of consecutive Saturday bookings that won’t stop until June 18th and they include events in San Diego California, Salt Lake City Utah and Heber Arizona.

Party like a rockstar Valentines Dance at the Mesa Academy