I played at a great wedding at Raven Verrado yesterday. This was a workin’ family and the last daughter of the clan to be married off and the father of the bride was a bit emotional about it. In his toast, he commented that the wedding plans had been rather matter-of-fact and mechanical. He was just writing the checks. When the song started for the bride’s processional, it hit home and he crrrrrriiiiiiii-ed like a weeeeee bay-beee! I’m well aware of the power of music too. I’ve been at this for 31 years now and even though I love to love my customers, I don’t really have a vested personal interest and I don’t know the history of their family etc. but I get emotional too when I see them celebrating something important in their lives and my music selections help give voice to the emotions of the day. It’s very gratifying to me. 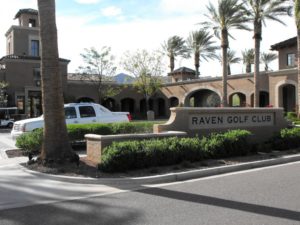 The stage is set.

I always enjoy all of the behind the scenes preparations, the setting of linens and dinnerware, the sound and lighting equipment, food, flowers, photography, musicians etc. The payoff is when guests arrive and have the good time that we planned for and worked for them to have. 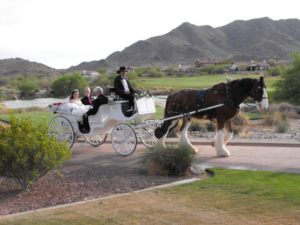 The bride arrived in a horse drawn carriage but I should have photographed the horses left profile. Let me ‘splain… 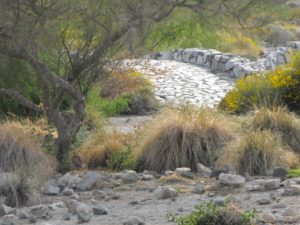 The carriage was supposed to come from off in the distance and cross this bridge and arrive in front of the wedding party and drop off the Maid of Honor and the Best man and then the bride and her father would continue around behind and disembark and come up the aisle from behind. The horse couldn’t navigate this bridge though. He made an attempt and as he got to the top of the hump he was now pulling the weight of the carriage and 5 adults and one kidlet. The driver helped the horse back down and they gave it a bit of a running start this time. He got to the top again and had no traction because of his steel shoes against the stone pavement. I was playing Pachabel’s “Canon in D” which is a 5 1/2 minute song and if you know the chord progression, it goes on and on and on and on. I’ve already played it twice at this point and the bride isn’t even in earshot of it yet! It was a song that she had chosen for this moment. A third attempt was made.

A few burly men dispatched themselves to see what they could do to help- perhaps pushing from behind. A couple of golf carts from the clubhouse were dispatched to assist as well if needed. I couldn’t bear another round of “Canon in D” so I rallied the troops and played the “William Tell Overture” (Theme from the Lone Ranger) to an eruption of cheers and laughter.

Rather than risk the liability of someone getting hurt, it was ultimately decided to turn the horse around and go back around the lake (a substantial distance) and come in from a direction that didn’t require crossing that bridge. When the bride got into earshot from the reverse side, I played her song again. The attendants disembarked and now the carriage had to go around the far end of the golf club (another substantial distance) to get in place behind the guests. This required the 4th airing of Canon in D. That’s 22 minutes of that chord progression, plus 4 minutes of the Lone Ranger Theme and finally the bride’s processional- Bach’s “Jesu, Joy of Man’s Desiring.” The bride and her father could have walked from the bridge but she wanted to ride that carriage. She’a a Disney fan and her recessional song was “So this is love?” from Cinderella. The guests were equally patient and gracious.

The ceremony got off nearly 45 minutes late but it was sure an adventure. In a strange way, things like this end up being rather charming in memory. It was not an ugly incident that would be remembered negatively but it will add some spice to things and it provides a story to tell. All of the kidlets and other interested guests got to go for carriage rides around the local streets during cocktail hour and into dinner and that was a real treat.

It dawned on me later… look at the pic of the horse again… I’ll wait… muscular, fit, trim, beautiful… It was a one-horsepower carriage. I think that the steel shoes were the problem more than the strength of the horse. I overheard that there are rubber shoes for horses for such situations. I heard that something similar had happened a few weeks ago on that bridge with another carriage company but that a horse almost lost her footing and went in the lake. I think the venue should advise brides going forward that this may be the case. I wouldn’t want the liability of anybody or a beautiful animal getting hurt and marring an otherwise lovely occasion. 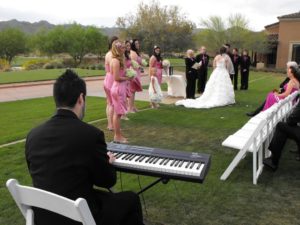 One of the groomsmen played an original composition for one element of the ceremony. He nailed it! 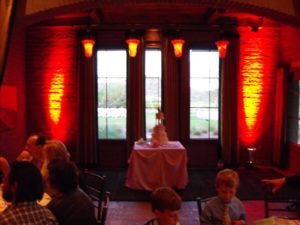 Also on that subject… the photographer was none other than Harley Bonham. He was recommended to the networking group that I own a couple of years ago and I liked him in the first two or three minutes that I got to meet him. We have crossed paths several times at industry functions and we’ve shared the stage on opposite pianos at a dueling piano club a couple of times but this was our first time working together in our professional element. I was at once intimidated but also really excited to work together. He has referred me to several of his customers and he did that blindlly trusting in my reputation and what personality he could detect in me in other settings- he had never actually seen me work and I feared he may discover that I am completely mediocre. It was as great as I had hoped it would be! He may be the nicest guy in this industry and he proved that he was also a brilliant professional to work with. We already have another common customer coming up in the fall.

Congratulations to Courtney and Eric. You guys ROCK! Thanks for letting me take care of the music for your wedding celebration.